My Daughter’s Monster High Dance Party was done with mostly free printables and a whole bunch of craftiness!  Her favorite part of the party, naturally, was the Monster High Doll Box Photo Booth, handcrafted by yours truly!

I had seen a few on Pinterest and knew my foam board and duct tape building skills would come in very handy for this project.

I headed over to the Dollar Tree and picked up three project display boards, about 6 boards of foam board (I did end up with some left over though) and a few rolls of duct tape to hold this bad boy together. I stopped into Michael’s thinking about picking up some spray paint or craft spray to paint this, I wasn’t quite sure how I was going to do it, but I figured I’d look around.  I talked to the associate there about using spray paint on foam board and just as I had suspected, he agreed that any paint would just be too wet for this type of project.  I had noticed a roll of teacher’s bulletin board paper on the way in and I decided that wrapping the box in black paper was the best way to go.  I also scored some funky pink rolls of paper on clearance to use almost like box liner and some hot pink streamers to decorate with.  Alternatively, you could use black plastic tablecloths to cover it and save a few dollars, but be careful. 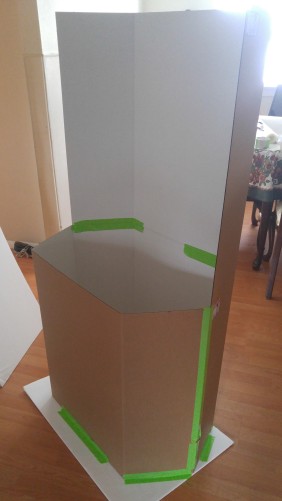 I’ve learned that a sheet rock knife is the easiest way to get through foam board but I usually just use my husband’s.  This time, I had a brand new one of my very own and I was way more excited than I should have been to be cutting foam board.  I probably should have went and bought a fourth display board, but I that would have meant wrangling the kids for another dollar store trip and I was on a role!! Plus, I had a bunch of foam board that I figured would work. Without worrying too much about the top or the sides, I was able to cut a sheet of foam board in half, attaching each piece to either side of a full sheet of foam board, building what looked like a homemade display board. I used duct tape to hold everything together and hot glue in some spots just to make it a little sturdier.  At this point, the booth looked like a hot mess and I just hoped that covering it in paper would make it all better. 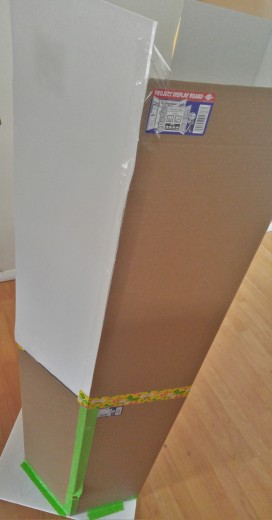 Once the shape was built, I cut the coffin shape into the front, saving the cut-out for possible use in another project that never happened (a perfect example of Messy Momming!).  The bulletin board paper worked out pretty well.  I started at the bottom front , taping the edge of the paper to the bottom of the foam board base and wrapped it almost like a present.  I knew I was going to run a little short on paper so I didn’t worry about covering the entire back.  The paper roll was wide enough to cover the sides too, so I lucked out.  There was just enough to put aside to use later to line the booth.

At this point the opening of the booth was covered by the bulletin board paper, so I cut out a smaller coffin shape and folded the pieces back to make nice crisp edges.  I used hot glue to hold those pieces back.  I didn’t worry about straight edges since I knew I’d be using pink streamer along the edges.

I cut the extra bulletin board paper in half, long ways, to use to line the left and right sides of the inside of the booth.  I used the pretty pink paper to line the back of inside and the floor of the photo booth. 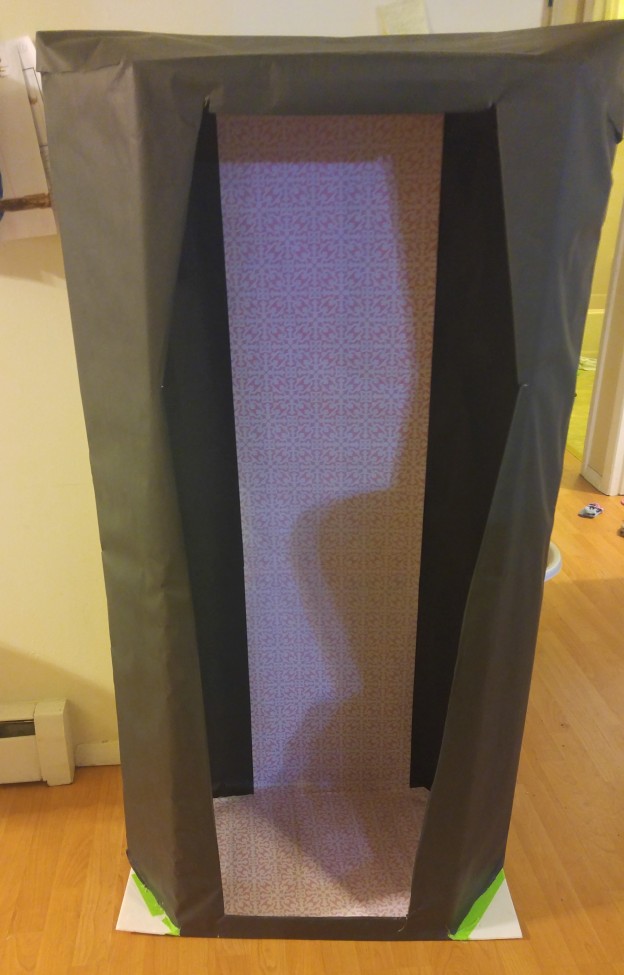 I was getting pretty excited about how this was all coming together, but the back not being covered didn’t look good.  I had a bunch of black plastic table cloths so I used one to glue to the back of the booth. This is where you need to be careful!

The last step of the photo booth, was to decorate it!  I found a few free printable logos on the internet and was able to download a free Monster High Font from famfonts.com that was perfect to personalize the Monster High Crest.  The finishing touch was the hot pink streamers along the edge of photo booth opening to make it pop! After we transported it to the hall, we covered the base with more black tablecloth, being sure to be careful of the molten lava.

My daughter absolutely loved her photo booth!! In fact, it’s been almost two months and we still have it up!  She’s already planning the theme for her next party and honestly, I can’t wait either! 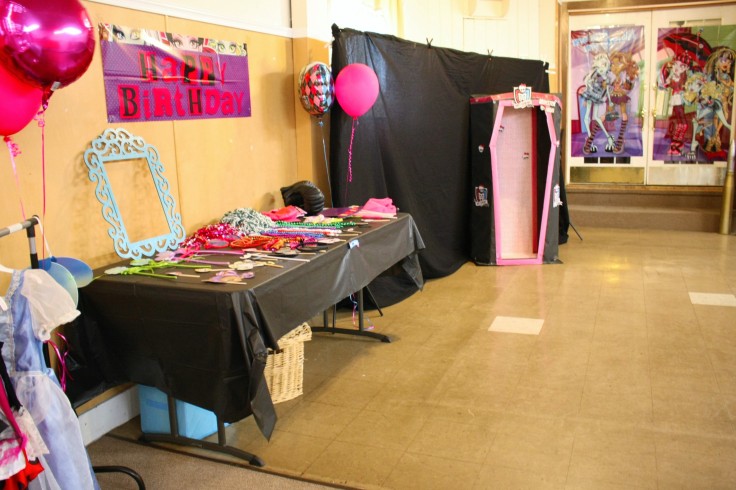